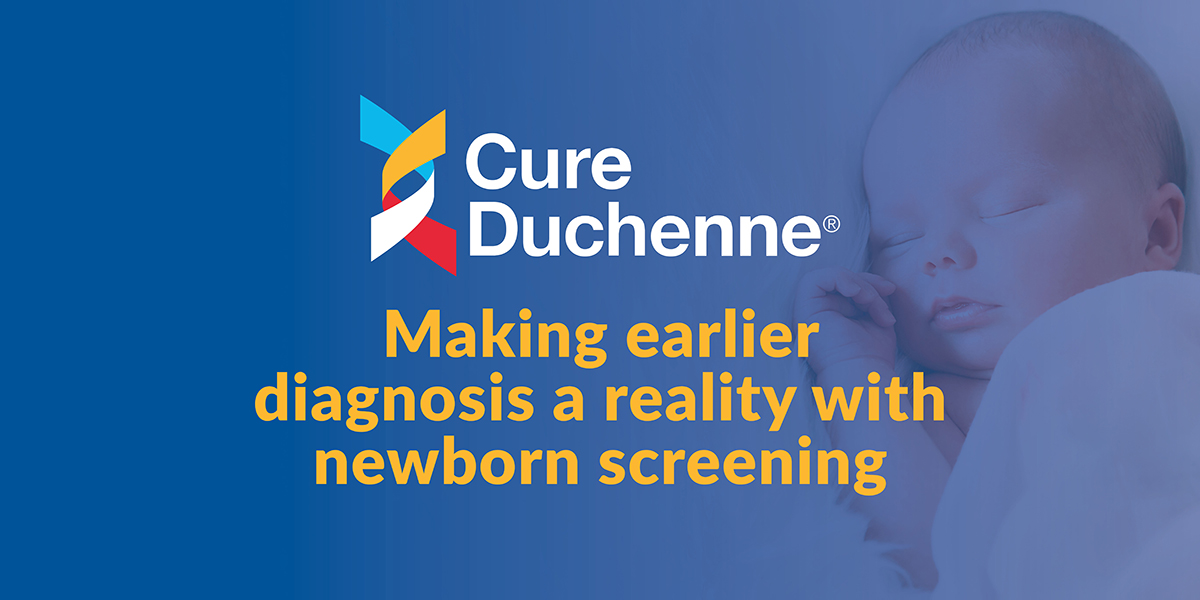 Duchenne muscular dystrophy was nominated to be added to the Recommended Uniform Screening Panel (RUSP), a list of disorders that are screened for at birth. This is an important step toward identifying individuals with Duchenne earlier, so that care can be started promptly and when it is believed treatments will be most effective.  CureDuchenne congratulates PPMD, the nonprofit organization that submitted the application, and MDA, the co-sponsor.

A CureDuchenne-funded pilot newborn screening (NBS) program, along with several pilot NBS programs, contributed data to this effort. These programs were critical in showing that a NBS process can be implemented and that the diagnostic tests are effective at identifying individuals with Duchenne.

Why is Duchenne being recommended now?

People may wonder why such a devastating disease as Duchenne is not already on the RUSP, the list of disorders that the Secretary of the Department of Health and Human Services (HHS) recommends for states to screen as part of their state universal NBS programs.

The purpose of newborn screening is to identify life-threatening diseases at birth so that effective treatments can be administered as early as possible. As a function of this goal, the RUSP only supports screening babies for diseases which have effective treatments and can only recommend testing with a proven method for detecting the disease.

There are several FDA-approved treatments for Duchenne, and many more in clinical trials.  Thus, the need for individuals with Duchenne to be treated early, when the therapies are likely to be most effective, already exists. In fact, it is expected to increase in the coming years with even more therapies approved.

Any submission for inclusion in the RUSP must also demonstrate that a testing facility can reliably perform an assay (a lab test to find and measure the amount of a specific substance) which indicates an individual may have Duchenne. Up until now, this has been the major roadblock to getting Duchenne on this list. But over the past few years, three separate pilot projects have been launched by PPMD, MDA and CureDuchenne. Each worked independently to build testing programs in New York, North Carolina, and Massachusetts, respectively.

How does NBS for Duchenne work?

All pilot programs begin the analysis with a tiny prick of blood taken from an infant’s heel just after birth to test for elevated levels of creatine kinase, which may indicate the infant has Duchenne. Creatine kinase, which is normally present inside of muscle cells, leaks out of the muscle and into the bloodstream in cases of DMD. However, other diseases may cause elevated levels of CK, so any individual with a high CK upon initial screen needs to be followed up with a genetic test to see if they indeed have Duchenne.

The RUSP nomination package is now under review and could take more than a year to complete.  Even if successful, though, the RUSP is not a mandate. It’s a national guideline to assist states when deciding on the conditions they shall include on their own state NBS panels. Each state will eventually make its own determination on what to test for, and how soon they can get those systems up and running. Therefore, while the national RUSP application is being considered, CureDuchenne’s NBS program at Brigham and Women’s Hospital will not only continue to operate, but also open conversations with the Massachusetts state lab about taking over the process.

Read the full press release below.